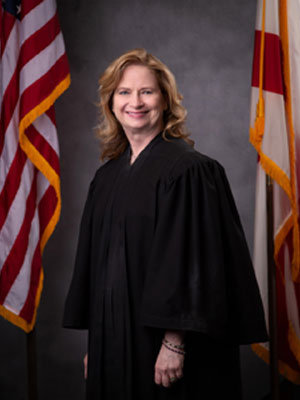 Judge Linda F. Coats is a native of Birmingham, Alabama, and has been a resident of Madison County for the past 29 years. She received a B.A. from the University of Alabama Huntsville in 1988 with majors in Political Science and Accounting, and a minor in English. She is a member of Pi Sigma Alpha Political Science Honorary Society, and Sigma Tau Delta English Honorary Society.  While at UAH, she served as President of the UAH Political Science Club.  Judge Coats received her Juris Doctorate in 1991 from the University of  Alabama School of Law.  Judge Coats is also a graduate of the National Criminal Defense College located at the Walter F. George School of Law at Mercer University in Macon, Georgia.

Judge Coats has served on the board of directors for Big Brothers Big Sisters of North Alabama, Downtown Rescue Mission, Alabama Federation of Republican Women, Huntsville’s Twickenham Republican Women, and Alabama Criminal Defense Lawyers Association.  Judge Coats was elected to the Madison County Republican Executive Committee in the 2006 and 2010 Republican Primaries.  She was elected as District Judge in November 2012 and is currently serving a six year term.

Judge Coats is also active in the community as a member of the Daughters of the American Revolution, the Maple Hill Cemetery Stroll, SOS Beagle Rescue of Alabama, the Heritage Quilters of Huntsville, the Junior League of Huntsville and Whitesburg Baptist Church.