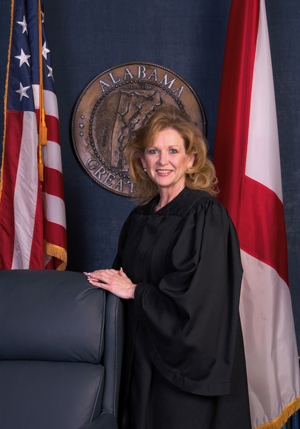 Judge Hall was appointed to the District Court bench by Governor Bob Riley in August, 2007 and then appointed by Governor Robert Bentley to the Circuit Bench on July, 2011. She received her undergraduate degree from the University of Alabama at Huntsville and her Juris Doctorate degree from Cumberland University where she graduated Magna Cum Laude. While at Cumberland Judge Hall was a member of the Law Review and published an article that has been cited for jury selection and received numerous awards and academic scholarships. Prior to her appointment, Judge Hall was actively engaged in litigation for 17 years. She handled cases throughout Alabama with a concentration on civil defense in the North Alabama region. She was cited as one of the Most Prolific lawyers in the State of Alabama. While in private practice, Judge Hall was a member of the Defense Research Institute, International Association of Arson Investigators and the Alabama Defense Lawyers Association. Since taking the bench, Judge Hall has presided over the Adult Mental Health Court and the JCC- Juvenile Conference Committee. Additionally, she founded JAC – Juvenile Alternative Court, which is the first of its kind in the State of Alabama, addressing the mental health needs of juveniles in Madison County.
Judge Hall established a Veterans Court to meet the needs of veterans in our community who suffer from mental illness and/or substance abuse issues.